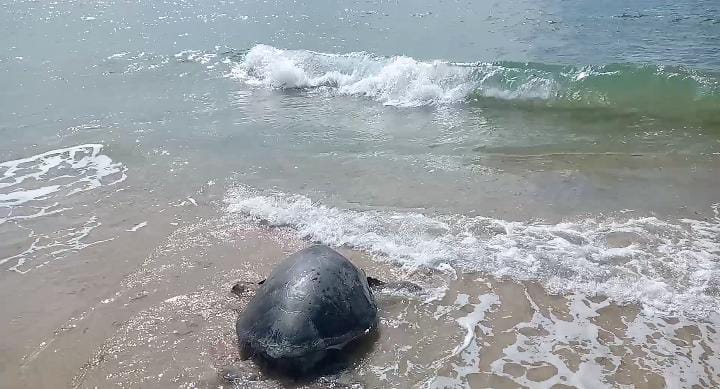 “It was early morning, and we were conducting our patrols as usual. On reaching the beach, we found a young man probably in his twenties, sitting on top of a turtle. He was actually asking us if we had a knife or a phone so he could call his friends to bring it and help him in slaughtering the turtle,” narrates Damaris Kitheka.

“We tried to convince him against it but to no avail. We had to call one of our leaders to intervene in the situation. Masha, the chief executive officer, came and it took almost an hour for him to convince the young man to let the turtle go.”

We stood there for some time monitoring the area to ensure that the young man had actually gone and the turtle had safely returned to the ocean. Knowing that the turtle had probably laid her eggs somewhere, we also had to look for the nest and ensure that it was properly hidden from the prying eyes of egg poachers, Kitheka added.

These are some of the activities conducted by Kitheka and other members of the Marereni Biodiversity Conservancy (MABICO), a community based organization (CBO) in their quest to protect the endangered sea turtles in their community.

The population of sea turtles across the world has been decreasing according to the International Union for Conservation of Nature (IUCN). The five species of sea turtles (the Olive Ridley, Leatherback turtle, the Green turtle, Loggerhead turtle and Hawksbill turtle) found in the Kenya coast, have been classified as endangered, critically endangered or vulnerable.

Marereni coastline in Kilifi County covers a stretch of about 20 kilometers. The area is a rich turtle breeding ground due to the presence of coral reefs, which encourage growth of sea grasses- a delicacy for turtles.

Members of the group carry out daily patrols across the coastline to ensure that the turtles and their nests are protected as well as looking out for any turtle casualties or deaths whilst also keeping abreast of any activities such as poaching that may bring harm to the species.

According to Michael Mwayele, a MABICO member, the patrols are usually carried out by a group of four members mostly youths who break into pairs, with each pair expected to cover at least 7 kilometres. He notes that the patrol can take as long as three to four hours.

“We usually go on foot, but sometimes we can just decide between ourselves and use a boda boda (motorcycle) which we have to pay for with money from our own pockets at a sum of shs. 100 (USD 1),” Kitheka adds.

“Also when the tides are higher and the water level has risen such that we cannot cross on foot to the other side of the beach, we use a boat owned by one of the MABICO members.”

She notes that especially during the nesting season, they have to be more vigilante, thus waking up early to patrol is not an option.

Such times, we have to be observant and find out whether the turtle that came to lay eggs made it safely back to the ocean or was it ambushed by poachers en route. Being that we keep records of nesting periods, we have to note it down and wait for the next nesting period (usually after at least 14 days), Kitheka adds.

In the coastal region, eggs are not just poached for food but also used as an aphrodisiac.

Egg poaching is so rampant in the region that in the 2020 nesting season alone, only seven survived out of 18 nests that had been discovered. The rest had been looted.

“When a nest is discovered, the patrol youths first make sure that it is properly camouflaged by getting rid of the tracks left by the egg-laying turtle,” says Daniel Masha, MABICO’s Chief Executive Officer.

“After all the tracks are cleared, the evidence is lost and the eggs become safe in their dark chamber for the incubation period, which, in our area, takes between 45 to 54 days, based on temperature. However, they keep on monitoring these nests until the eggs hatch.”

To save the eggs from poachers (when the nest is clearly visible) and other natural threats, including sedimentation, floods and submerging, Masha notes that they are forced to translocate the eggs. A process that is often rigorous and requires a lot of care.

So far, since 2012, the organization has moved about 30 nests and has monitored hundreds that did not need translocation. A nest can have up to 150 eggs or more.

“Being that we go to the beach in pairs, it is often not easy for poachers to suspect us. They often think that this is just a couple hanging out by the beach,” Mwayele notes. “This technique has helped us to identify poaching activities in the area.”

“Once we see anyone with turtle meat especially fishermen, we immediately send the message to the CEO or any other leader who in turn calls the Kenya Wildlife Service (KWS) to come to the scene and arrest the culprits before they get away with the act,” he adds.

Though harvesting of sea turtles is prohibited by the wildlife conservation and management act, 2013 and the offender if caught a life sentence or fine of shs.20 million (USD 200,000), illegal harvesting and trading of the species is still a menace in the area.

“When a carcass is observed, the nature of the physical appearance is described, and the carcass is then photographed and recorded,” explains Masha, adding that the GPS coordinates are also taken.

He notes that some of the cases are reported to the KWS officials for them to take action as so many factors contribute to these deaths including trawling, fishing, poaching, diseases, pollution and others.

The group also undertakes beach cleaning activities, community sensitization on importance of conserving turtles as well as planting of mangroves.

Though their efforts to protect the endangered species have borne some fruits, the group is still facing hurdles.

“As a group our activities are limited to carrying out monitoring activities along the shores because we don’t have the equipment to reach the deep sea,” said Moses Karisa, Vice chairman MABICO.

“Patrolling in the deep sea like 10 to 15 kilometres from the shore, especially in the areas with coral reefs, would help as it would keep fishermen, such as those using gillnets and spear guns, from causing harm to the turtles with their fishing gears.”

Transport is the biggest challenge facing the patrol teams, Kitheka notes. She says that they have to cover the whole distance on foot which is very tiring and being that she lives at the village centre she often has to wake up earlier around 4.00 am or 4.30 am to reach the beach by 5.00 am to start the morning patrol.

Mwayele adds that the distance from one point to another is often very long and hunger is also something they have to deal with because at the time they leave their homes for the morning patrols, it is usually too early yet they come back three or four hours later.

Kitheka adds that majority of the MABICO members are unemployed youths, so each time they leave the house early in the morning, their households expect them to come back with some income to help in running the house.

“You find you have dependents who are waiting on you to come back with something as small as a packet of flour but when you come back, you have nothing and you still have to depend for instance, on your parents,” said Kitheka.

“If we had well-wishers to support our activities, it would be more encouraging and it would keep the group motivated. Some of our members have stopped being as active as they were before because they are not getting any returns which help to sustain their families which are dependent on them.”

Masha notes that currently they are working on establishing a locally managed marine area (LMMA) in Marereni. This will help protect the species as well as reduce poaching related activities in the area as jobs will be created for members of the community thus alleviating poverty which is an underlying factor for poaching, he notes.

KEMRI Doing Outstanding Work in Response and Containment of COVID-19