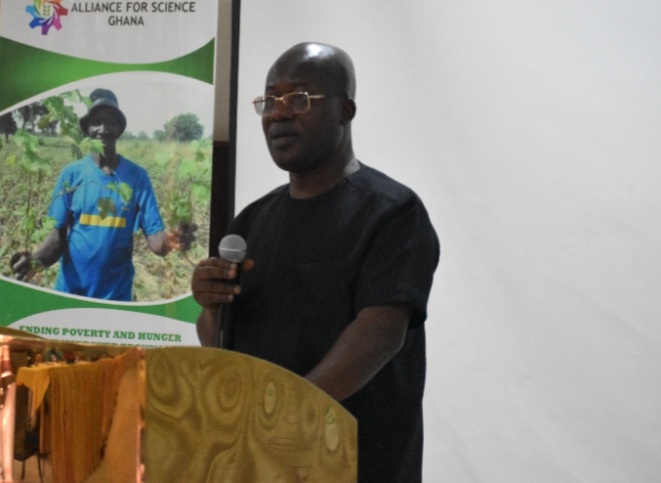 Africa has a more urgent need than the rest of the world to adopt genetically modified organisms for agricultural improvement, says Prof. Eric Yirenkyi Danquah, founding director of the West Africa Centre for Crop Improvement (WACCI) at the University of Ghana.

“This is urgency. Better seeds developed through genetic engineering offer hope. Let us not allow regulatory delays to prevent millions of farmers from accessing this life-saving technology,” he noted.

Danquah expressed concern that “anti-GMO activism has stalled the adoption of genetically engineered crops in many countries, contributing to the perpetuation of unsafe pesticide use, hunger and poverty. Science-based agriculture can preserve critical indigenous foods, such as cowpea, millet, cassava and sorghum, while reducing the environmental impacts of farming. This is evidence.”

“The inescapable conclusion, if we consider justice, the evidence and the urgency, is that smallholder farmers in Africa need access to biotech [GM] crops more than farmers anywhere in the world,” Danquah said. “The time has come for African governments to use the data available to take decisions that would improve livelihoods and lift millions out of extreme hunger and poverty. We need political will for swift and innovative action.”

Danquah noted that biotechnology “is the most rapidly adopted innovation in the history of agriculture” and Africa should not be left out. Yet only about seven African countries have approved GM crops, while they’re under development in another 11. By comparison, over 190 million hectares of GM crops were grown globally in 29 countries in 2019, contributing significantly to food security, sustainability, climate change mitigation and improved lives for some 17 million farmers and their families.

Danquah made his comments at a science communication workshop in Accra organized by the Alliance for Science, WACCI, the International Institute for Tropical Agriculture (IITA) and the Open Forum on Agricultural Biotechnology (OFAB). The four-day workshop brought together scientists from academic institutions and research organizations across the country for training in science communication.

“The development of improved varieties of our staple crops with high yields and resistance to the physical and biological stresses is absolutely necessary for a green revolution and food self-sufficiency in Ghana,” Danquah said. “This can be achieved with precision and efficiency using plant biotechnologies and genomics as important tools.”

Danquah cited a need to end misinformation that paints GMOs in a bad light. “It is my hope that the participants at this workshop will be equipped with the knowledge and skills needed for better communication on the issues at stake to change minds and mindsets for the misconceptions to be erased, and to free our people, including opinion leaders, policy planners and leaders, of mental slavery in the GM technology propaganda,” he noted.

He also vouched for the safety of GMOs. “It’s been 27 years since the first commercial GMOs were released and I am not aware of a single credible food/feed problem on the safety of GMOs. There is a very strong scientific consensus globally on GMOs just as scientists are [aligned] on climate change,” he noted. “I have been exposed to the science behind GMOs since 1986 at Cambridge and I have followed developments to date.”

Developing countries were not motivated to adopt first-generation GMOs because the technology focused on commercial agriculture and ws burdened with a complex, expensive and unpredictable regulatory system, he explained. Now there are second generation biotechnologies, including genome editing, synthetic biology and engineering biology, that focus on pro-poor traits.

“Today, I submit that genetically modified (GM) crops have become an important part of the sustainable agriculture toolkit, alongside traditional breeding techniques,” he said. “Give farmers in Ghana a free choice to select and adopt crops developed through modern science in plant breeding including the GM technology… Farmers are very smart people worldwide. You can fool them once only. No farmer will plant GMOs if they did not have real benefits.”

GM crops under development in Ghana

The GM cowpea has been developed to resist the deadly pod borer, which can cause up to 100 percent crop loss. “With PBR Cowpea, farmers can attain the potential yields of most commercially released cowpea varieties, which is about 2 tonnes per hectare,” he explained. “This is about four-fold yield increment over existing yields.”

He said approval of the variety will help ensure “protection of our environment from hazardous insecticides, protection of cowpea farmers from pesticide poisoning, and protection of consumers from pesticide poisoning. With GM cowpea, Ghana can attain food sufficiency in the area of cowpea production. Nigeria has commercialized PBR cowpea and will soon export grains to Ghana informally. Our market women will buy cowpea from Nigeria and there is no guarantee that some PBR cowpea will not be included in what is brought into Ghana.”

Studies show that the rice increases yields by 15 to 30 percent over conventional varieties in nitrogen-deficient soils. If this crop gets adopted, resource poor farmers who cannot afford the recommended levels of fertilizer can still have good yields, he said. This will improve livelihoods and mitigate the effects of climate change, as well support rice cultivation in areas previously considered too marginal for agriculture.

Countries Off-target in Minimizing Adverse Impacts of Chemicals and Waste

Low Uptake of HIV Self-testing among the Youth