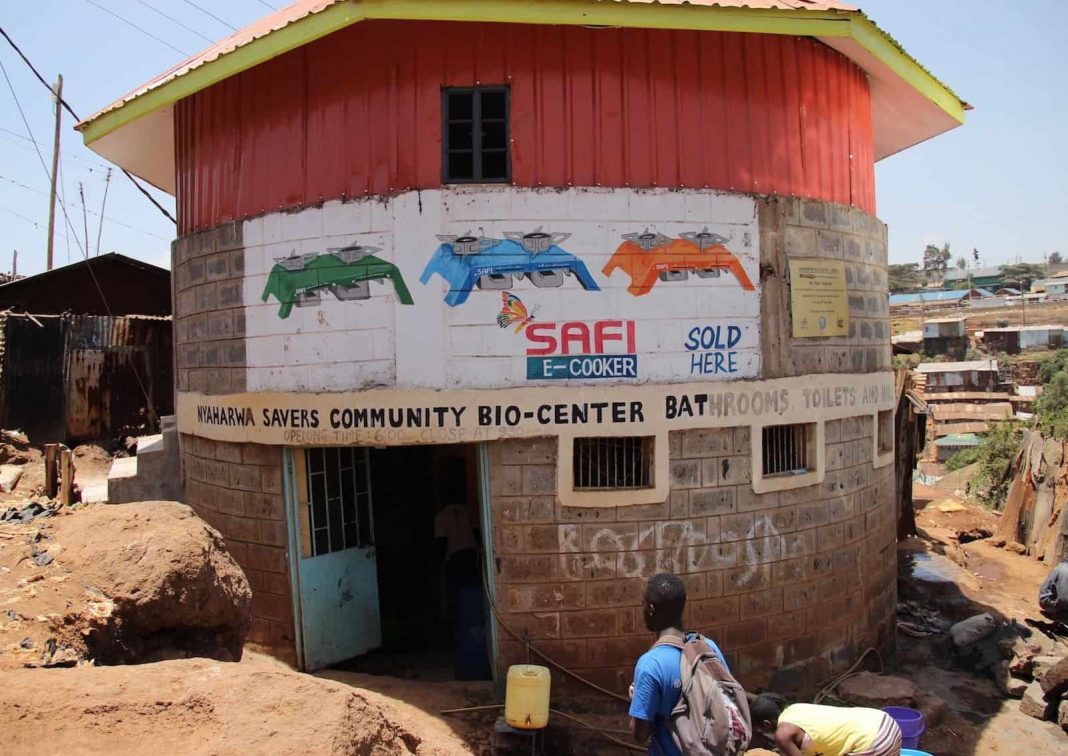 Kibera, like other slums in Africa, is facing dire challenges of sanitation. The large population in the informal settlement is a limiting factor to the development of a long-term solution to the proper disposal of human waste.

The sight of overflowing pit latrines and sewer lines is a common phenomenon in this place. Rains makes the situation worse, especially for those who reside near the river beds. The bare earth streets are carved with gullies which makes it difficult for exhaust lorries to access the area to collect the human waste from the pit latrines. Poverty levels also inhibit the locals from paying for sanitation services.

Umande Trust, a non-governmental organization, is working with local self-help groups to provide sanitation in Kibera and other slums in the country. They help set up bio-centers which provide facilities, such as flush toilets and bathrooms. To access the facilities, residents pay Kshs. 5 (about $0.05).

A group with ready land can present it and request to be built for a bio-center as there is no restriction on the composition or structure of the groups. However, there is a long and tedious process that the self-help groups have to go through before the centers are built.

“The self-help groups have a mandate to avail land and make sure that it is legally theirs. We as an organization confirm with the local administration that the land being provided to us is not being quarreled over. After that is when we begin the process of sourcing funds for the construction of the bio center which ranges from two months to six months,” said the managing trustee of Umande Trust, Benazir Douglas.

The biocentres are dorm-shaped with washroom facilities where the human wastes are collected. The flush toilets are connected to strong plastic pipes, linked to a dome-shaped holding tank and bio-digester. When the human waste from the toilets reach the tank, it is broken down by anaerobic bacteria (bacteria that can survive in areas with insufficient oxygen more so in human waste) in three stages.

In the first stage, the anaerobic bacteria convert the waste into a liquid form. The liquid is then filtered and converted to acids. In the third stage, the liquid is retained for approximately three to four weeks before turning to methane gas, which collects at the inside-top of the dome-shaped tank. The tank is connected with a gas pipe which directs it to the biocentre where it is used for heating water and cooking purposes by the residents at a small fee.

The residents who use the facility intimate that the biogas is cheaper compared to charcoal, which is the main source of cooking  fuel in this Kibera. Recently, the price of charcoal has shot up with the government banning of logging activities in a move to make Kenya greener and protect the remaining forests.  The price of a two kilogram container of charcoal retails at Kshs. 100 (about $ 1 dollar) while for only ten shillings one can go to the biocentre and cook his or her ugali (a meal made from grounded maize flour mixed with water).

To access clean and affordable sanitation services, one has to accompany him or herself with only Kshs. 5 (about $ 0.05) to access the toilets and 10 shillings if they want to access the clean bathrooms facilities as well. One can also decide to experience the luxury of bathing with hot water, which is heated at the centers for only Kshs. 15 (about $0.15).

The benefits of the biocentres to the local community are two-fold. Besides providing sanitation, it is also providing a cheaper source of fuel. Locals have taken the initiative positively and have allowed the creation of over 50 biocentres and still more requests have been by different groups who need support to build their own biocentres.

The biocentres are managed by the local groups, who employ a caretaker to run the center. The centers have large water tanks which ensure a steady water supply when fully filled up.

Kid Yot Biocentre, a facility which was constructed after a group of youths came together to solve the issue of sanitation, is an example of such a facility. Ian Omondi, the caretaker of the Kid Yot Biocentre, informed ScienceAfrica of how the biocentre has helped him and many young people in the area.

“The biocentre has really helped us. Most of our age mates in this area are unemployed and idle, so they fall prey to illegal activities like robbery, drug abuse and gambling. For us, Edward Odhiambo, who runs this center has given us a chance to make good of our lives,” he said.

“On the upper part of this biocentre we have a conference hall which we hire out for meetings. Most of the time you will find youths in the boda boda (motorcycle business) are the ones who use it for their Sacco meetings on a weekly basis.”

Susan Auma, a caretaker of the Nyaharwa Savers Community Bio-center shares the same sentiments as Omondi. “This biocentre has really helped me. It is a source of income to me and I use the funds to educate my children and buy basic things to use in the house.”

However, she complained that the main water line that they used in the biocentre was damaged and the relevant authorities had not done anything to restore it. “Nowadays we rely on water vendors who charge Ksh. 600 (about $6)to fill up the tanks, which lasts for two days since our main water line was damaged and nothing has been done about it. In a day the facility makes around Ksh. 700 (about $7).”

For Nyaharwa Savers Community Bio-center the upper space consists of rental houses going for Kshs.3000 (about $30).

Despite having a cheap source of energy, people are reluctant to use it for cooking so the biogas is used for warming bathing water only. Some feel cooking near toilets is unhygienic and others feel the process of carrying the food to go and cook at the biocentres is hectic.

“Most people here do not use the bio gas here for cooking, they opt to cook at home so we use the gas to warm bathing water,” Omondi says.

“An initiative of connecting houses with piped gas from the bio centers had begun and one was required just to pay Kshs.200 (about USD 2). This was supposed to be a big breakthrough but the high maintenance cost posed as the main challenge adding to the fact that most of the people in the area are poor,” Ramtu Abdalla, Upande’s Head of Community Partnership, responded.

Peter Oloo, a resident, appreciates the role the biocentre has played for his and other families in the area.

“This biocentre has really helped us. In the past we had to walk for a long distance so that we could access a latrine. Most of the time you would find a long queue and also the same latrine is overflowing. This posed as a health hazard to our children and mostly in the night one can opt just to use a polythene bag and throw it and not care where it would land, “he commented.

Stara is another biocentre in the area run by the Stara Peace Women Organization, who also manage an orphan school, The Stara Rescue Center and School in Makina, Kibera. The biocentre also boasts of a greenhouse in which they plant vegetables, such as tomatoes and kales.

The Stara organization is also assisting in making of biocentres in schools, such as the Stara Rescue Center and school to help in the waste collection and the gas produced is used in heating of water that is used for bathing by the students.

Beyond the clean toilets, bathrooms, rental houses, and hall for hire services, the Stara biocentre provides an area for the members to practice small scale farming.

Moving around Kibera, there were visible signs of more and more biocentres being set up, showing how positively the initiative is being taken by the residents. More and more self-help groups are presenting themselves to be built for a biocenter, according to Emmanuel Naeku, a staff at Umande trust organization.

However, the inconsistent water supply has made running of these biocentres difficult as most of them rely on expensive water from vendors to run the facilities.

“Currently we receive water supply once in a week here. This biocentre is impossible to operate if there is no water, so we have to supplement this by buying from water vendors or we will be forced to close until we get water,” says Omondi, the Kid Yot Biocentre caretaker.