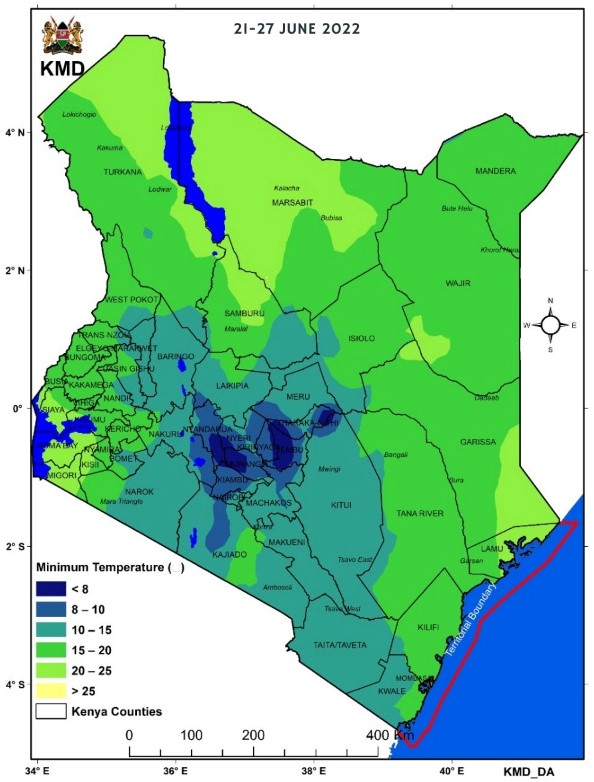 For the next three months, colder temperatures below 10 degrees Celsius, with light rains are expected over most central highlands and Nairobi area, according to the Kenya Meteorological Department seasonal (June-July-August) weather forecast.

Some of these areas in the central highland include Embu, Tharaka-Nithi, Kirinyaga, Nyandarua, Kiambu, and Nyeri counties.

On the other hand, near normal temperatures ranging between 15-20 degrees Celsius are expected over Counties in Northwestern Kenya, Highlands West of the Rift Valley, Lake Victoria basin region, and Southern and Central Rift Valley.

Consequently, cases of respiratory disease like asthma, pneumonia, flu and common cold are likely to increase over Nairobi County, the Highlands East of the Rift valley and South eastern lowlands as the cold season sets in.

And so, the public in these areas is advised to keep warm and avoid using charcoal jikos in poorly ventilated houses as these jikos produce carbon monoxide gas that is lethal if inhaled.

Occasional afternoon and night showers are also likely especially during the month of June. The total rainfall amounts during the period are likely to be close to the long-term average for the season.

The heavy rainfall is expected to maintain conducive soil moisture for the growing of trees and regeneration of vegetation.

The public are therefore advised to take advantage of this by growing trees to increase land cover. Another impact is that these areas may also experience land degradation including soil erosion as a result of flooding. KMD has called for soil conservation measures to address this.

Cases of Malaria are also expected, KMD notes but this may not rise beyond normal transmission due to the predicted reduced temperatures during the season.

Waterborne diseases are also expected to increase in these areas as a result of contamination of domestic water sources. Health are therefore advised to preposition and redistribute medical supplies and insect-treated nets in the affected areas as well as carry out public health education on disease prevention and Water Sanitation and Hygiene (WASH).

Food shortage over the arid and semi-arid lands (ASAL) areas of the northern and eastern sectors of the country could lead to an increase in malnutrition-related diseases.

Therefore KMD suggests that food security assessment should be carried out to identify the most vulnerable communities and provide them with water, food or food supplements.