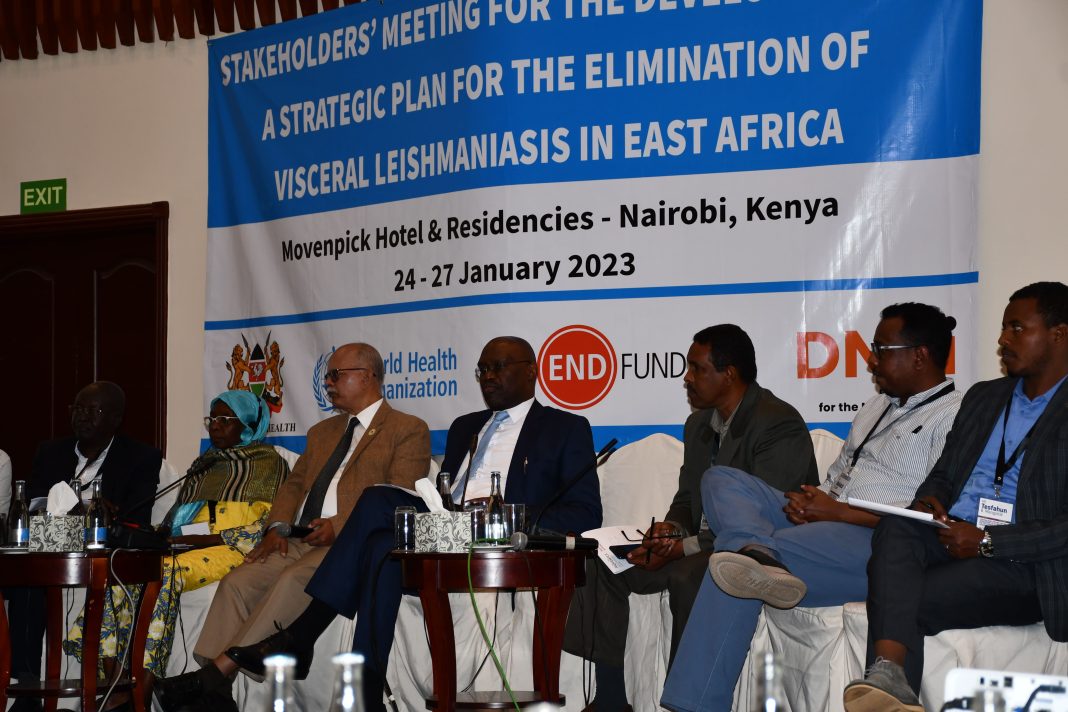 Several countries drawn from the Eastern Africa region have committed to the Nairobi Declaration on the elimination of visceral leishmaniasis in the region by 2030.

The representatives of these countries speaking during the ongoing stakeholders’ meeting in Kenya organized by the World Health Organization (WHO) for the development of a strategic plan for the elimination of the disease in the region, agreed to advocate with their respective governments and agencies to support this cause.

Dr. Sultani Matendechero, Directorate of public health in the Kenyan Ministry of Health, while reading the declaration on behalf of Dr. Patrick Amoth, Director for Health, said that “this regional approach enables our Eastern Africa countries to stop the spread through borders and travel. We hope for a one-standard approach that each country can relate to and abide with for control and elimination.”

Furthermore, he referred to the declaration as a game changer noting that one of the things about leishmaniasis is that without a regional approach, the gains made by a particular country may risk being reversed due to reinfections brought about by cross-border movements of people of neighboring countries.

Dr. Matendechero, added that the declaration will guide the implementation of interventions thereby accelerating chances of controlling and eliminating the disease.

“I have also requested the participants to think of forming something like an alliance because in most cases neglected tropical diseases are not always prioritized by governments and researchers also do not prioritize these diseases because they do not have return on investment,” he said.

“This creates lack of awareness and advocacy about the diseases. Therefore, this alliance will enable those involved to come up with advocacy to governments so that we can have sustainable control or they will have now a better way of mobilizing resources so that we can achieve more and reduce the burden much more effectively.”

Visceral leishmaniasis also known as Kalaazar, is a neglected tropical disease(NTD) caused by Leishmania parasites and transmitted through the bites of infected female phlebotomine sandflies. According to WHO, the disease has a case fatality rate of up to 90% if left untreated with the East Africa region being among the top regions globally with the disease burden.

Meanwhile in Kenya, Kalaazar is endemic in at least nine counties, with Marsabit, Turkana and West Pokot having the highest cases and up to 10 million people in the country risk getting infected with the disease.

It is complicated by other diseases such as HIV/AIDS and malnutrition, affecting the liver, spleen and at a very severe stage it may cause distention of the abdomen. Moreover, although everybody is susceptible to it, Kalaazar is more pronounced among young and male children mainly due to their weak immunity and the nature of their activities respectively.

Dr. Matendechero further notes that the declaration will build on the considerable efforts that have been made by the government of Kenya in its bid to control and eliminate the disease.

According to him, the Ministry of Health has put in place guidelines that are being used to train health workers, community health volunteers and members of the community at large about the disease. He also adds that the government has put in place passive and active surveillance as well as improved communication to encourage people to take preventive measures and not to expose themselves too much to sand flies and secure their living areas so that they minimize the breeding of sandflies.

“The guidelines helped the ministry to give the disease a high index of suspicion because it mimics other diseases. So when someone checks in at any government hospital, the health worker will test and confirm if he or she is infected. If it is confirmed that the person is infected, he or she will be followed to the community and where other people in the community will also be tested to confirm if they also have the disease,” Dr. Matendechero noted.

Also, he said that the ministry is providing medicines and treatment for people infected with leishmaniasis because the disease is mostly common among poor people and its treatment is quite expensive and a program has been established for coordinating the donations for their partners and making sure that people who need the medicines most are able to get them.

“It also provides for rapid detection, advocacy and promotion of health communication are also embedded in the document. Even those who get infected the declaration provides for prompt treatment with effective medication,” he said.

“It is usually felt that some NTDs are even more neglected than others and leishmaniasis falls in this particular group which some people call the neglected of the neglected. So this declaration will serve to remove leishmaniasis from that group so that it can also be given some kind of attention just like the other NTDs.”