Thick and tall, standing above six feet, Francis Thoya Chengo is built like a boxer. He towers almost above everybody else in Gede area of Kilifi County, with his imposing figure giving him a commanding presence in any crowd.

His measured steps as he ambles his way around Gede Health Centre and a deep, penetrating look depicts a man on a mission. And when he speaks, people pay attention.

Chengo is not here to enter a boxing ring. He is here to tackle a different kind of challenge, urging the residents in this area to adopt the use of modern contraceptives to plan their families. In a region famed for high birth rate, biting poverty and high illiteracy levels, planning families can often be the difference between whether a family is able to put food on the table and educate the children, or not.

For seven years now, Chengo has become a household name for his relentless crusade on family planning, where apart from creating awareness on the use of contraceptives among the locals, he has also acquired skills, enabling him to administer some of the family planning methods at household level and which are currently on high demand in the region.

A man delivering and administering contraceptives to women door-to-door would have raised eyebrows, particularly among the patriarchal Mijikenda community. But Chengo has used his skills even as an evangelical preacher of the word of God to defy the many stereotypes and woo and convince the community that it is only through proper planning of families that their economic fortunes would improve.

“Even as we teach about Jesus Christ and salvation, we also teach about the importance of family planning,” says the father of four whose first born is 13 and last born slightly above one year old.

His working title is Community Health Officer with a small office reserved for him at Gede Health Centre. Under him are 50 Community Health Volunteers (CHVs) who are part of a well organized outreach programme involved in creating awareness on contraceptives and taking the family planning message to families in their homes.

This therefore means the consumers of such services do not need to seek them from health facilities, some of which are in fur flung areas. The CHVs duty is to scour the length and breadth of their designated area and educate families on the use of modern family planning (FP) methods. This includes home visitations to talk to couples as well as holding vigils in local markets where they educate and answer questions regarding the use of contraceptives.

Once a prospective client has agreed to be put on contraceptives and chosen a particular method, the CHVs then summon Chengo. The sound of his revving motorbike is all too familiar to the locals as he navigates the village alleys to deliver the critical reproductive health services.

“Giving the services at household level has revolutionized the uptake of contraceptives here,” says Chengo, with an air of satisfaction. “Through the outreach programme, contraceptives have become popular among the rural community where at least 15 women show up every month looking for advice on how to get long term family planning methods,” he adds.

The plan has had great impact and has proven to be an effective way of reaching out to the under-served populations in Kilifi County, therefore raising the uptake of contraceptives.

According to data by Performance Monitoring for Action (PMA) survey conducted in Kilifi county between December 2014 and December 2020, it shows a marked increase in the use of long acting contraceptives among all women from 9 percent in 2014 to 17 percent in 2020.

The data reveals that injectable and implant methods account for over 87 percent of the method mix among married women in the county where seven out of 10 women admitted satisfaction in the use of modern contraceptives.

Kilifi County Reproductive Health Coordinator Kenneth Miriti credits the outreach team with the increased uptake of contraceptives, noting that 75 percent of the community is covered by the community outreach units.

“The uptake of FP services has gone up due to their efforts alongside other combined efforts,” he says.

To help more people adopt family planning, Miriti says the County Government enlisted the services of 39 Community Health Officers spread across the county. Each of them leads a 50 member community health outreach unit. They undergo refresher courses to keep up with the modern trends in FP, Miriti adds.

Although he is not a medic, Chengo, through the support of the county government was enrolled for a six months course at KMTC where he acquired basic skills to administer some of the FP methods such as the long acting injectables and implants.

The impact of his outreach work was however felt during the outbreak of the COVID-19 pandemic which led to the closure of Gede Health Centre after it was converted to an isolation centre following the surging numbers for COVID-19 patients. This move threw all other services including reproductive health services into limbo.

For a whole year, the local community had to rely on Kilifi Referral Hospital which is over 50km away. Many seeking such services resigned to their fate at home.

It was during this period that Sidi Mlewa, 33, from Majaoni village in Kilifi North wanted to give her womb a break, having given birth to five little children in quick succession. Her fifth pregnancy – without any history of contraception use – was her wake up call. Sadly for her, she had no way of accessing family planning services near her home.

We caught up with her at her home where she was just lazing about with nothing to do as her children played nearby. Her farm is bare, save for a few coconut trees and lonely emaciated goats wandering around. Here, poverty stares at the residents in the eye.

Soon, two of Mlewa’s young children start crying, almost in unison. She lifts her small frame and reaches out to the youngest. As she cuddles him, the other child nudges closer with a forlorn look.

“Taking them to clinic was a struggle. My husband had to come along carrying some,” says Mlewa. The spacing between the children is barely a year. She says they had to stop breastfeeding when she could no longer produce milk, at which stage she would be pregnant again. Having been married at the age of 18, Mlewa says family planning was not in her cards, majorly because her husband wanted many children.

However, when she was pregnant with her fifth child, she thought it was time to give her body a break. With the nearby Gede Health Centre closed, Chengo and his outreach team came in handy for her.

“After they educated me on contraceptives, I chose the three year implant. Maybe I will have another child when this one is at least three years old,” she says as her one and half year old son suckles away.

“It is good to give the child ample time to breastfeed. It is good for his health and growth. That is what we have been taught by the health officers,” Mlewa remarks.

About 10km away from Mlewa’s home, we visit Jacinta Mutua who is heavy with her third child. She had just discontinued the use of a three month injectable shot popularly known as Depo due to side effects and was in the process of deciding what other method to use when Gede Health Centre was shut down. For over six months, she was on pills, but even these could not be accessed easily. Chengo did the trick for her.

“He would routinely deliver the pills to me every month. His services played a big role during that disruption period,” says the ECDE teacher.

Being in charge of the community outreach programme on FP, Chengo and his colleagues act as the link between the government and the community. Contraception methods he can competently administer include the condoms, pills, Depo and the three year – one rod implant. For any other method such as the five year. two – rod implant, Bilateral Tubal Ligation (BTL) and Intrauterine Device (IUD), he refers the cases to trained health officers. Even then, some of the women still insist on him being present due to the trust they have with him.

Some of Chengo’s clients are school going girls who, due to poverty, have fallen into relationships with adult men for small favours such as sanitary pads and upkeep money. For fear of pregnancy, they opt for contraceptives. He says these prefer the three month shot because it is not detectable.
“We however advise them to bring along their parents for consent,” he says.

On some days, Chengo takes his FP crusade to Magwes – the local drinking dens where men, and sometimes women drink palm wine in the evenings. “My drive is to see a healthy community and family planning is one way of ensuring that,” he states.

However, it has not always been smooth sailing for him. He recalls an incident in 2019 in Dabaso area where a man berated him before flashing a machete and ordering him out of his compound. The situation was however saved by a brother to the assailant who calmed him down as Chengo cowered in fear. The incident did not dent his drive though.

Mrs Mutua says the delivery of family planning awareness and commodities at household level is the best thing. “At home, I am free to ask whatever questions I want without fear or feeling ashamed, unlike in hospitals where the environment is different. Home is convenient,” she notes. 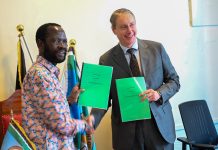 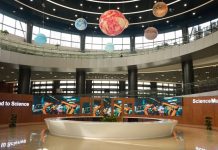 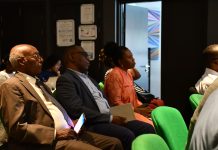