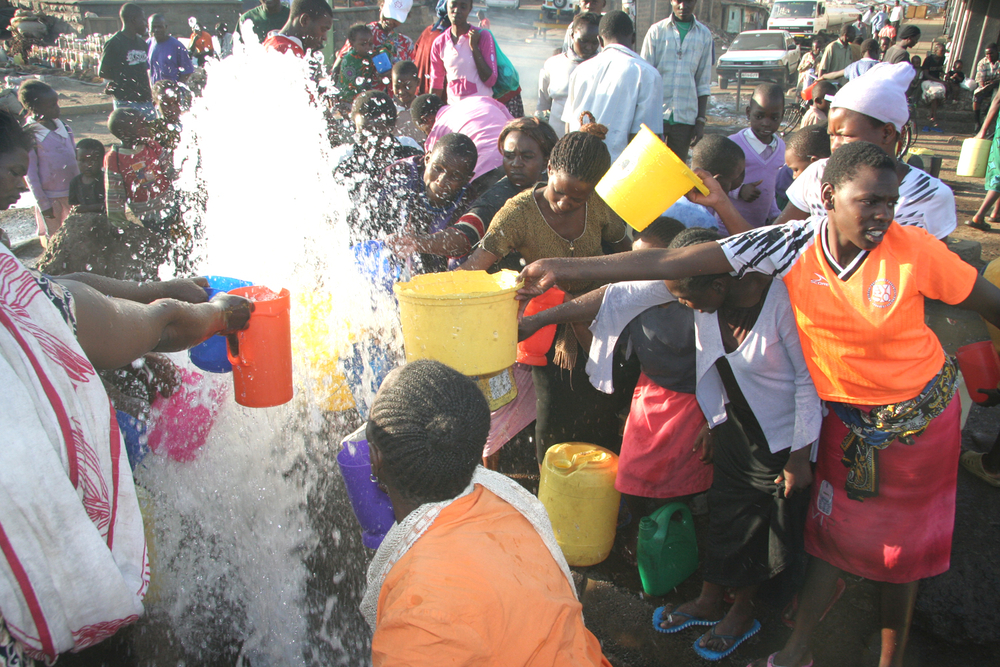 The residents of informal settlements in Nairobi increasingly find it hard to access water, a commodity they need it more especially to help prevent the spread of Covid-19 pandemic.

The prolonged dry spell has caused those who sell water to increase prices because they know residents can hardly get piped water.

In Nairobi for example, residents living in the major informal settlements such as Kibera, Mathare, Mukuru, Kayole, Huruma, Kawangware, Kangemi, Kariobangi, Dandora, Baba Ndogo and parts of Githurai estates experience challenges of water. Among all these shanty settlements, only a minority of households have access to the public water supply which is less costly.

Surprisingly, as much as water in these informal settlements is scarce, it is available and accessible to few individuals known as ‘cartels’ who have privatized it and make a kill out of its sale.

According to Lilian Kanini, a resident from Kawangware estate, the precious commodity costs less per litre in urban middle class neighborhoods where there is piped water.  In low class or in informal settlements where the residents relies on water vendors, water is extremely expensive.

Kanini said residents have always complained of the cartels who diverted water-pipes making illegal connections to certain open yards. They normally sell it expensively to desperate residents from the low class in the estate.

Kanini explained as a result of poor pipes connections, it seeps in sewerage exposing the residents to waterborne diseases.  These have led to diseases such as cholera, typhoid, dysentery, diarrhea among other stomach related diseases.

“On average, I spend over 30 percent of my monthly income on water only. This is considering Kawangware estate, one of the informal settlements in Nairobi where cost of living is expected to be a little bit low,” she regretted.

Kanini said: “Our house rent maybe affordable per say, but cost of water including other expenses makes it approximately three times more compared to middle class households.  I stay in this slum because of my grocery business that keeps me going. Otherwise I could have relocated due to high demand of water and its shortage that presents more economic challenges.”

On the other hand, Peres Luyala claimed most women in Kawangware are extremely affected by water scarcity. This is because in her culture, fetching water is responsibility of women, therefore forcing majority to walk long distances to fetch it.

“Here in Kawangware, women wake up at 5am to walk for about one or two kilometres to fetch water. Again, late in the evening after work, women are forced to walk same distance but in groups for security purposes without which rape cases do occur,” Luyala said.

“So, as much as water scarcity poses challenges on health, insecurity and financial drain to families, young girls and women are worse affected. This is because they become targets of attack by youth either at dawn or dusk,” Luyala complained.

“Unfortunately for those who leave their houses unattended very early in the morning to collect water, they also risk their houses being broken into and the list may go on and on,” she added.

Joseph Manyala, a private security guard affirmed cases of insecurity are on increase mostly towards women. He disclosed that many have been attacked or raped in the past until recently when curfew was enforced by government.

“During dry seasons cases of mugging, thuggery, theft, rape are rampant forcing many women to hire people like us to escort them to the collecting water points especially after at dusk or dawn,” Manyala  said.

“During the daytime, it is really hard to fetch water because so many people want it at same time. So, I usually prefer to fetch water at night though risky but it takes short time to fill in all containers one would like to,” Luyala confidently affirmed.

“Yes, I fear being robbed, raped and any attacks. But I usually do ensure neighbors are out and people are up for their businesses just in case” she added.

To make matters worse, Covid-19 pandemic and the recommendations of World Health Organization (WHO) and the Government requires the population to adhere to the organization’s directives on handwashing, hygiene and physical distancing. Unfortunately, it is difficult to implement these preventive measures in informal settlements where there is limited access to water, no sanitation and physical distancing is nearly impossible.

Concerning health issues of water-borne diseases which is highly attributed to broken water pipes passing underground between sewerage lines and also in poor condition. Health experts advise residents to boil water, or disinfect and if possible depend on piped tap water whose source in known.

From observation, one could see most water-pipes have cracks or leakages which are likely to trickle in germs. This then is transmitted through water and spread to residents while bathing, washing, drinking, or by eating raw foods like fruits exposing resident to diseases.

According to Elkana Jacob, Communication Director Governor’s Press Service & Media Chief Officer Nairobi City County, health and safety of all residents in Nairobi is of their concern. He said especially during this Covid-19 pandemic period, sufficient supply of water is necessary that is why bowsers or tankers have been introduced to supply it in various estates.

Elkana said Nairobi County together with National Governments, are working together to ensure it benefit more residents especially during this time of Covid-19. For example, the commissioning of water interventions by President Uhuru Kenyatta in Athi River was to ensure access to free and clean water for residents living in Nairobi informal settlements.

“For example, as we talk there is community water supply project in Kabiria, Huruma and Kibera communities by bowsers or tankers each producing between 10,000 to 12,000 liters of water per day and serving more than 6,000 households,” Elkana confirmed.

Kibera, Kabiria, Kawangware residents confirmed there are five NMS bowsers or tankers each carrying capacity of 8000-10000 litres of water supplying it daily to them. They admitted it has helped minimized water shortages hence diseases and insecurity that used to be rampad.

“The only problem with the bowsers is timing. They come odd hours when most people are at work. So, a few people who are left at home benefit the supply hence much need to be done for equal supply,” a resident complaied.

He said the project targets high population areas in Nairobi, Kiambu, Muranga, Machakos and Kajiado Counties. Approximately 2.1 million residents across these counties can now access free water from the project which is set to supply 41.3 million litres of water per day.

However, there are challenges of mechanical breakdowns, poor access roads, residents crowding and scrambling for water without wearing masks risking lives. The water supply is not consisted and timing is unpredictable hence many residents miss out while at work.