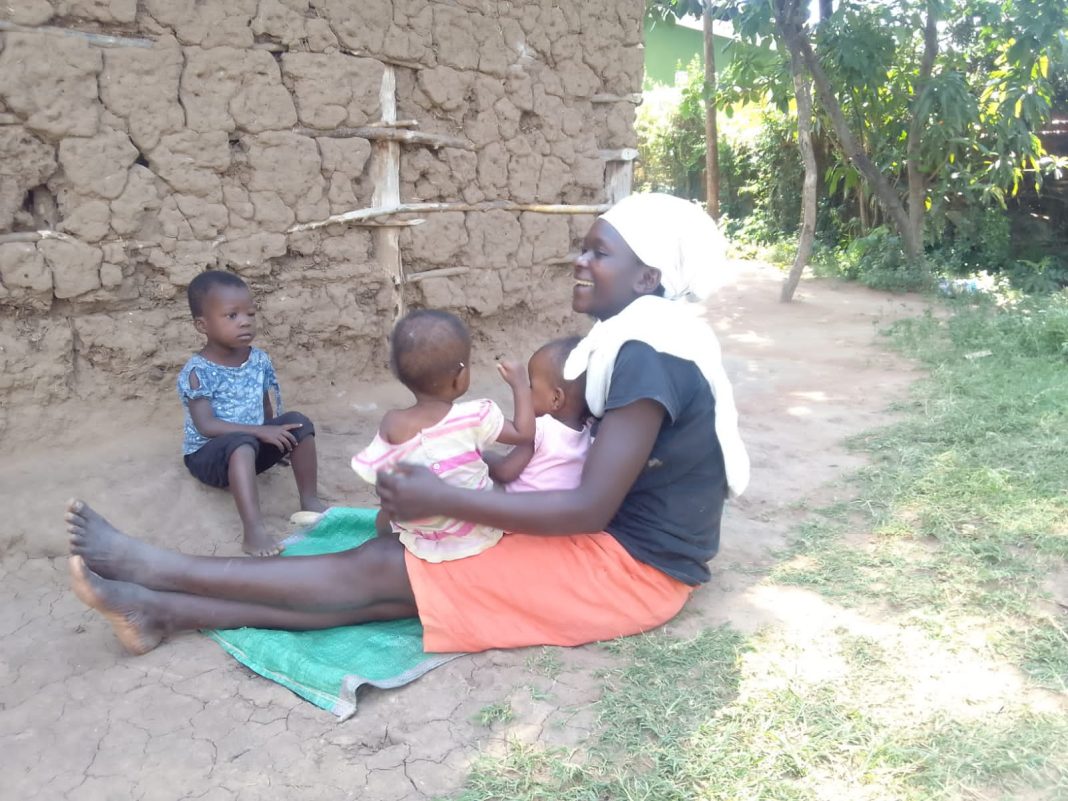 Jane and Judy,2, look frightened when they see me and soon, they start wailing loudly one after the other. Their loud cries fill the one-bedroom house. They are sitting on the floor, unable to crawl away. They can neither stand nor walk. Their skin color is pale yellow but their mother, Sylvia Nekesa assures me that that is the original color of her children’s skin.

Sylvia, 28, mother of five and a small-scale maize farmer in Bumula Sub County in Bungoma County says that during postnatal care (PNC), she was properly advised on exclusive breastfeeding for six months and the basic food she should feed her children after six months. She however says that it was hard for her to maintain that as she was not feeding well herself. She started giving her children porridge made from maize flour after just one month.

“Currently I give them porridge and sometimes ugali and soup. I had the twins in July 2020. They are two years old now but they can only sit. Until now, they have not started crawling, standing, walking or talking coherently,” says Silvia. She adds that her third born also experienced slow growth and she is confident that the twins will be fine soon.

Dr. Dickens Lubanga, a pediatrician at Bungoma County Referral Hospital says that these are signs of stunting, one of the most common form of undernutrition in children.

“Undernutrition in children occurs when the body does not receive sufficient macronutrients and micronutrients. Macronutrients refer to carbohydrates, proteins fats and vitamins while micronutrients mainly refer to minerals like iron, copper and zinc. The deficiency of these essential nutrients in a child’s diet over a period of time results to undernutrition,” says Dr. Lubanga.

This condition according to Dr. Lubanga results to children being underweight (weighing less than the normal amount for one’s age and height), wasted (general reduction in vitality and strength of body and mind), stunted (abnormal slow growth and development or low height for one’s age) and contacting vitamins and minerals deficiency diseases like rickets and scurvy.

According to United Nations Children’s Education Fund (UNICEF), one in four infants under the age of five in Kenya has stunted growth. This translates to about two million children nationwide. The organization cites food insecurity as a major cause of undernutrition.

Data from Bungoma County Referral Hospital indicate that undernutrition cases in children have been reducing significantly over the past four years since 2018. Until July 2022 however, the cases have increased to 1172 from 521 in the entire year of 2021. This translates to 124% increase. According to Kenya National Bureau of Statistics 2019 report, around 24% of children under five years in Bungoma County are moderately or severely stunted.

The two sub-counties that are leading in these cases are Bumula and Sirisia. They are also leading in food insecurity issues in the County. These areas have vast land but poverty is still a big challenge.

Article 43 section 1(c) and (d) states that the Government shall ensure that every Kenyan has a right to be free from hunger, to have adequate food of acceptable quality, uninterrupted supply of clean and safe water in adequate quantities.

According to Kenya National Demographic Survey 2014, about half of Kenya’s population is poor with 7.5 million people living in extreme poverty and 10 million people or more suffering from chronic food insecurity and poor nutrition.

National Food and Nutrition Policy records that in recent years, about two million people require assistance to access food at any time. This number increases and can even double during periods of drought, heavy rains and floods.

There have been and still are global efforts in ensuring food security. The Millennium Development Goal (MDG) one which was set during the World Food Summit in 1996 and the United Nations Millennium Summit in 2000 was to cut hunger in half by 2015. This MDG according to United Nations Food and Agriculture Organization (FAO) was not met.

The United Nations then developed Sustainable Development Goals (SDGs) in 2015 and among them was SDG two which aims to achieve zero hunger by achieving food security, improved nutrition and sustainable agriculture by 2030. Despite setting these goals, global progress on fighting hunger is alarmingly slow as the number of undernourished children persists.

In Kenya, food availability is understood in terms of cereal supply and food security in terms of having enough maize. In the last two decades, however, maize production has reduced by 10% while consumption rates increase by 3% per annum. 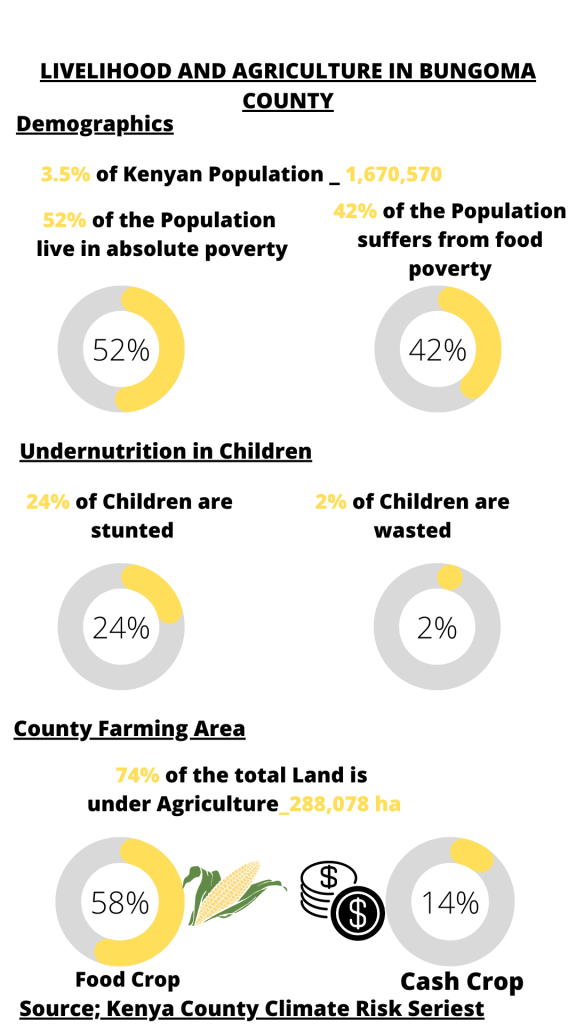 Dr. Lubanga however says that cereals (like maize and beans that are majorly grown in Bungoma) are not enough in terms of nutrients to children. He cites overdependence on selected grains most especially maize as a major barrier towards achieving reduced undernutrition cases in children. According to him, most farmers in Bungoma plant maize and beans in every season.

“Apart from maize and beans, there are several other types of food needed by a child’s body like fruits, vegetables and clean water. Clean water is very essential in a child’s diet because it helps in the digestion process which is to help break down the food a child eats and allow its nutrients to be absorbed by the body,” adds Dr. Lubanga.

According to Kenya County Climate Risk Profile Bungoma County, Undernutrition is attributed to poor diversification of food sources including an overdependence on crops such as maize.

Bungoma County is one of the largest producers of maize in Kenya. It ranks fourth after Trans-Nzoia, Uasin Gishu and Nakuru counties. It produces approximately 258,000 tons of maize annually according to Agricultural Sector Development Support Program (ASDSP) 2014. Most maize-producing farmers in Bungoma are small or medium-scale. The few large-scale maize farmers are mostly found in Tongaren sub-county. Maize processing is done by local posho mills for domestic consumption.

“Exploitative middlemen have dominated the maize market in Bungoma County. They buy maize from farmers at very low prices with an excuse that they are reducing the transport cost for the farmers. Sometimes we sell maize cheaply when we have pressing financial issues and this leaves us with no surplus,” says Maria Andeso Simiyu, a medium scale maize farmer in from Butieli village in Kanduyi Sub County.

She adds that slow production interventions in terms of technology, education and financing by the county and national government has been a major setback in the sector. The fact that farmers have no direct access to markets is also a challenge since they receive less for their produce. This increases poverty rates and poor household nutrition. Maria has since resorted to cassava farming too since it requires little capital.

Sylvia on the other hand says that she continually grows maize because she does not have any other alternative. She uses organic fertilizer and the harvest is usually too little to feed the family for even two months. “During the harvest period, my children mostly eat boiled maize, ugali and githeri,” she concludes.

Article 53 section 1(c) states that every child has a right to basic nutrition, shelter and health care. One of the major goals of the National Food and Nutrition Policy 2017-2022 is to achieve good nutrition for optimum health of all Kenyans by enhancing food access, providing special nutrition interventions for specific vulnerable groups and creating awareness to provision of nutritious foods to all family members especially children.

Despite this policy and many others on food and nutrition that are currently being implemented in Kenya, undernutrition and micronutrient deficiencies are still highly prevalent in Kenya, particularly at crucial stages of life. Children under five years are particularly affected by deficiencies in vitamin A (84% of children), iron (73.4%), and zinc (51%) according to the Ministry of Health.

Thus, more action needs to be taken to ensure access to these essential nutrients for all children not only in Bungoma but the entire country.

Countries Urged to Focus on Fulfilling the Paris Agreement’s Targets