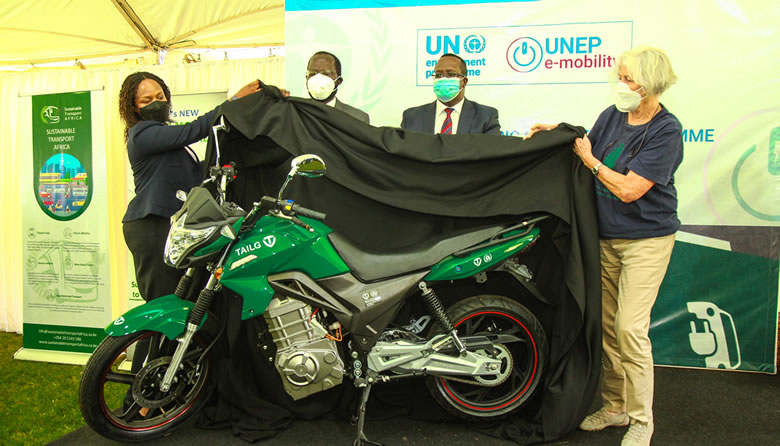 The motor bikes, which use rechargeable batteries, are soundless and do not emit smoke through exhaust pipes like the conventional ones. Already, a number of electric bikes have been dispatched to key departments within the County government in order to popularize the initiative through a pilot program, which will end in December 2021.

“As you can see the cycles are green which means they are friendly to the environment” Prof. Anyang Nyong’o, Governor of Kisumu County said while lancing the bikes. Electric mobility he said, represented a culmination of many efforts to de-motorize, decongest and de-carbonize movement within the County. Further, he expressed great optimizing of seeing to a re-energization automotive of assembly in Kenya starting with electric 2&3 wheeler assembly in Kisumu.

He said motorbike operators will be encouraged to acquire the bikes on loan basis so that they can repay for them gradually.

Already, 20 electric motorbikes have been brought to Kisumu by the UN-Habitat to promote pollution-free the transportation systems in the county.

Seven village administrators in Kisumu County have also been given the electric bikes for their daily use and to help popularize the environment-friendly means of transport.

Prof Nyong’o said the bikes, whose batteries last some 12 hours and is a money saver in terms of fuel costs and maintenance, can be purchased at KShs.150,000 (about $1500).

UN-Habitat representative, Ms. Rahab Mundara, said there is a need to transform the city in line with the development of new technologies.

She said they will support cities that have shown interest in modernizing and transforming their transport systems.

In deed in a number of developed nations, such as Switzerland and Denmark, the concept of non-motorized transport system has matured. Cycling, for example, is major a means of  transport for many people as it vital in tackling climate change and general pollution.

In addition, cycling is also a means of exercising the body for physical fitness. In Copenhagen for instance, all streets have cycling lanes and rules are strictly observed unlike Kenya where matatus and motor cyclists break the rules with abandon.

During the launch, UNEP, together with the four pilot partners; Kisumu County Government, Kenya Power & Lighting Company, Karura Forest Association and Powerhive, introduced the pilot projects and showcased some of the electric motorcycles at the event.

The objective of the pilot is to evaluate various aspects of electric motorbike operation so as to help policymakers develop the right policy framework to see to a sustainable shift to low emissions electric mobility in Kenya,

The pilots are part of a project that UNEP is implementing in Kenya, Uganda, Ethiopia, Thailand, The Philippines, and Viet Nam titled “Integrating Electric 2&3 Wheelers into Existing Urban Transport Modes in Developing and Transitional Countries” which is funded by the International Climate Initiative of the German Federal Ministry for the Environment, Nature Conservation and Nuclear Safety.

UNEP Deputy Executive Director. Ms. Joyce Musya, stressed that the launch was a manifestation of urgently needed transformation to electric mobility due to rising pollutant and climate emissions from mobility, as well as the socio-economic sustainable development benefits awaiting countries that transition to electric mobility.

She also commended the strong collaboration between government, civil society and the private sector manifest in the electric motorcycle pilots pointing that it’s precisely because of this collaboration that the shift will happen.

Mr. Nyaga Kibuchi, a consultant with the United Nations Environment Programme (UNEP) who is involved the pilot project with the Kisumu County Government says that the bikes have been imported the electric motor bikes have been brought on a pilot basis which will end so that they can get the feedback.

Nyaga says that the electric bikes do not need many spare parts since they need chargers only. “The issue will be captured as we continue getting feedbacks from the users through the Kisumu County government” he says, adding that a fully charged bike can cover between 50 to 100 kilometers.

The consultant says the pilot study will end in December 2021 after which they will come up with a way forward in consultation with the Kisumu County Government to ensure sustainability of the project.

Millimani village administrator Ruth Achieng says the electric bikes are convenient since it can take more than four days of local running without requiring to be recharged. She says the only impediment is that it does not use solar power for recharging the battery since electricity is expensive and sometimes it is unavailable for long periods.

“The manufactures should consider installing solar charging devises on the bikes,” Achieng says.

Onyango says that the bikes do not make noise neither do they vibrate. However, he laments that the battery his bike uses is not durable. “I commute for 3 kilometers to my work place from home so I have to recharge it at the end of the day “he says, adding that the electric bikes favor those who live in city because they can easily access electricity at the workplace.

Kisumu County has over 80,000 motor cycles according to a survey carried out three years ago. The chairman of the Kisumu County boda boda (Motorbike transporters) rider’s union, Mr. Willis Aketch, says the number of motorbikes for transport could exceed 100,000 since more people have been joining the industry in recent times but they have not joined the union.

Aketch says many people have joined the industry following the adverse effects of Covid-19 since a number have been sacked. The chairman says that the electric bikes should be made available for them since they are the major users of the mode of transport.