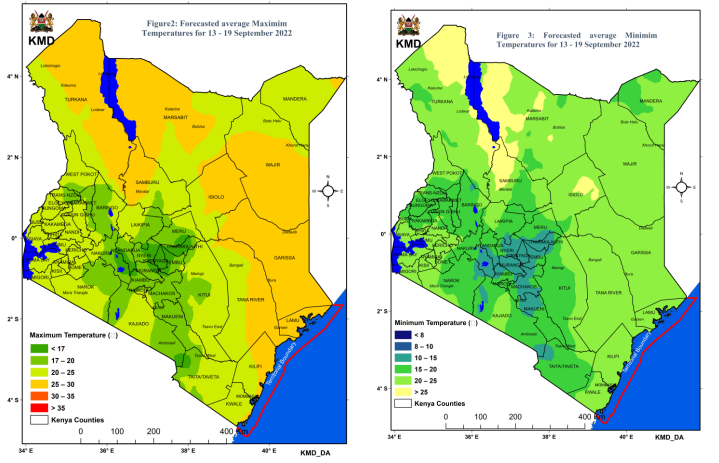 Increased rainfall is expected over several places in the Highlands West of the Rift Valley, the Lake Victoria Basin, the Central and South Rift Valley, the Coast and North Western Kenya, according to the Kenya Meteorological Department (KMD) weekly forecast.

The forecast notes that morning rains, afternoon showers and thunderstorms are likely to occur in the Highlands of the west of the Rift Valley, the Lake Victoria basin and the Central and South Rift Valley with occasional night showers.

Also, in North western Kenya, morning rains and afternoon showers with thunderstorms as well as night showers are likely to occur over few places during the first half of the forecast period while the remainder of the week is likely to be sunny and dry.

Intermittent cloudiness, accompanied by light rains in the morning and afternoon showers are likely to occur over few places in the Highland East of the rift valley. The region is also expected to have partly cloudy nights with few showers in some places.

In North eastern Kenya, days are expected to be generally sunny and nights partly cloudy while the South Eastern lowlands is expected to have intermittent cloudiness in the morning giving way to sunny intervals for the rest of the day with nights that are partly cloudy.

Occasional morning and afternoon showers are likely however some days are expected to be generally sunny and nights partly cloudy at the Coast, KMD says.

Save Vultures from Extinction