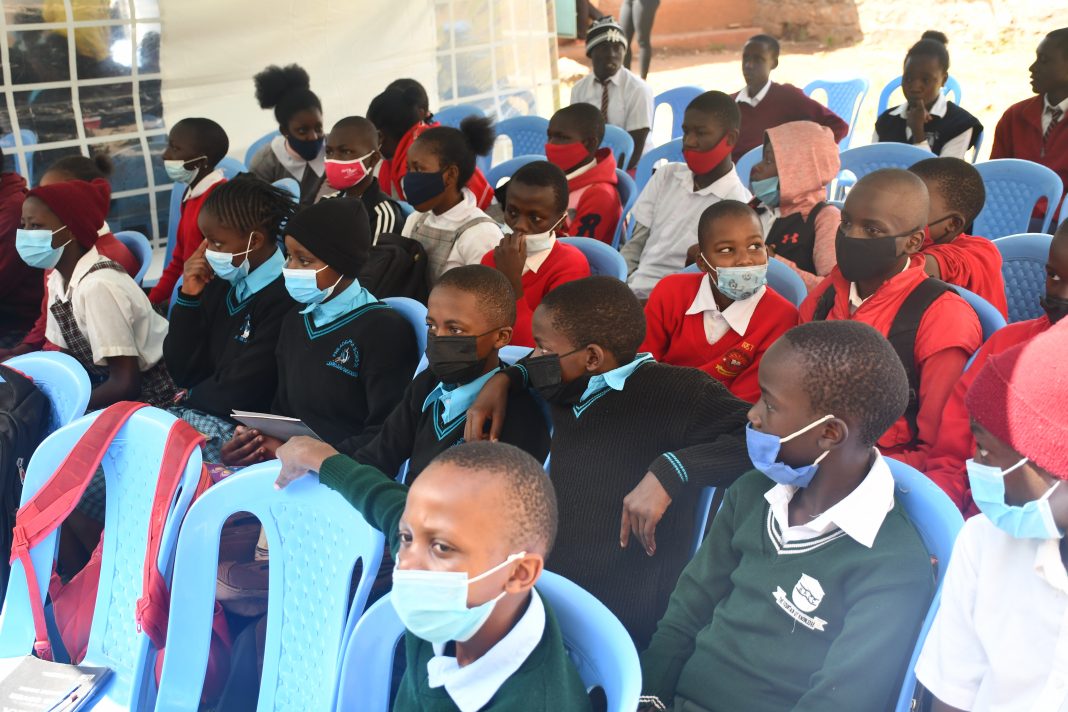 Just like other African countries, Kenya continues to face enormous challenges in Science, Technology, Engineering and Mathematics (STEM) at the primary and secondary level, and even the tertiary in terms of performance, enrolment and gender inequality.

Studies indicate that these challenges are influenced by factors such as poverty, inadequate funding, lack of interest among students, inadequate learning materials, among others.

Yet, the World Economic Forum stated in the 2018 report on the Future of Jobs that emerging technologies such as artificial intelligence (AI), big data analytics and cloud technology will be the dominant drivers of business growth by 2030.

This means that the younger population aged 25 and below need to be encouraged to pursue subjects and courses in STEM that will help them develop tangible solutions for issues affecting their community as well as secure jobs.

In an effort to encourage the uptake of STEM subjects from an early age by showing students their significance and bright career prospects, a group of science teachers within Dagoretti in Nairobi, Kenya with support from Safaricom and Cocacola held the first “Dagoretti Science Open Day” initiative as an alternative to motivate schoolchildren living in the area to pursue those subjects.

Dagoretti is a small but densely populated informal settlement at the outskirts of the western part of Nairobi city in Kenya having most primary and secondary schools privately- owned with low population of children coming from poor families.

Due to this, the schools are unable to afford some science teaching aids for the children as they only rely on the available funds that students pay to run their activities.

David Olwanda, Lead of the Dagoretti Science Open Day and Biology and Chemistry teacher at Riruta Satellite Education Centre reaffirmed that most of the schools are small with very low population.

“Because of that, running a school is a challenge as they rely on the little money that students pay as a result; these schools are unable to equip them the laboratories to enhance the science subjects learning.”

For instance, he said most of the students in Riruta Education Centre are those that could not get a chance in big public secondary schools due to financial constraints.

So, the initiative provided an opportunity for these children to have fun through hands-on learning with real-world applications hence this exposed them to the idea that STEM- oriented subjects are easy, manageable and every person is applying them either consciously or unconsciously.

Brenda Maya, a form three student from Shilce Secondary School said the Science Open Day changed her perspective and attitude towards science as she previously perceived it as complex.

Also, in the agriculture category, she said: “I learnt that some plastics that we throw away can actually be re-used in other ways including toothpaste lids, bottle tops that can be used in the construction of vertical garden demonstrations.”

Clinton Omondi, form four student at Shilce School said the Science Open Day is an eye opener to him as he got an interest in doing robotics and he is looking forward to pursuing a course in science when he completes his secondary education.

According to Olwanda, the Dagoretti Science Open Day came after they realized a big change in students enrolling in STEM – oriented subjects following a previous mentorship program with Global Minimum.

Global Minimum is an organization that provides marginalized youth in low-resourced schools with an opportunity to learn design thinking, programming and engineering, and also nourishes a growth mindset required to solve real-life problems.

Through this initiative, Olwanda said they decided to come up with the Science Open Day as they realized that the more they did something about science, the more they got more students enrolling for STEM- related subjects.

“Initially, we had a challenge with girls in form three and four enrolling in science subjects. Most of the boys were going for the sciences whereas the girls were going for alternative subjects,” he recalled.

However, the Lead of the initiative explained: “When we brought in the Global Minimum group which started to teach our children, the computer, and robotics and coding, we realized a big change with regards to the ratio of girls to boys pursuing science subjects as most of the girls were even leaving humanity subjects to pursue the sciences.”

For instance, 16 out of 18 form four students in Riruta Satellite Education Centre are currently doing three science subjects, that is, Chemistry, Biology and Physics, whereas the remaining students are taking two science subjects.

In terms of gender, he acknowledged that 40% of the girls in form four are enrolled in the three science subjects whereas boys dominate with 60%. In form three, 45% of the girls are taking the subjects while the remaining percentage is boys.

One of the reasons he mentioned contributing to this gender inequality is fear of carrying out science experiments among the girls, stating that most of these girls fear the outcome of an experiment.

“They do not know if the experiments could lead to an explosion or not. But boys are aggressive and curious, whatever happens they will solve it later.”

So, he suggested that the girls need to be motivated to be curious, and also be assured that when conducting these experiments, the examiner has already ensured that the outcome would not cause any danger to students.

Again he recommended that women pursuing STEM careers need to get involved in such outreach programs in order to motivate more girls to pursue STEM-oriented subjects especially in secondary schools.

According to the United Nations Educational, Scientific and Cultural Organization (UNESCO), women are currently making tremendous progress in STEM but the issue of gender disparity remains elusive as men continue to outnumber women even at the top levels of these professions.

The Africa Academy of Science also urged African governments in their 2020 report on Women in Science to advocate for and create opportunities for girls to be supported in their pursuit of STEM subjects and courses.

The organization also suggested increasing the budgetary allocation to the education sector could help increase the number of women in STEM.

For students that are not good in academics but are gifted with talents, and may not make it to college or university, he suggested that they can be attached either to a mentor or an organization doing the same in order to help them reach their potential.

For instance, if the student is good in robotics but he or she do not have the papers, his or her talent can be tapped into a firm dealing with robotics.

Olwanda said they are also planning to reach other slums areas in Nairobi as well as across the country if they get more support because other schoolchildren living in remote areas cannot access such science learning aids as well.

He urged the government to also support private schools in terms of stationery and other resources that can help enhance students’ interest in STEM subjects as this will ensure equality among students in private and public schools.

In addition, He also stated that the government needs to facilitate experts in various fields of science during these kinds of program to enable them reach more children in order to help nurture young talents.

And some of the facilities can be brought to the schools. The government can do the mapping to know the number of schools that are there and what talents are there in order to establish facilities that can help nurture them.