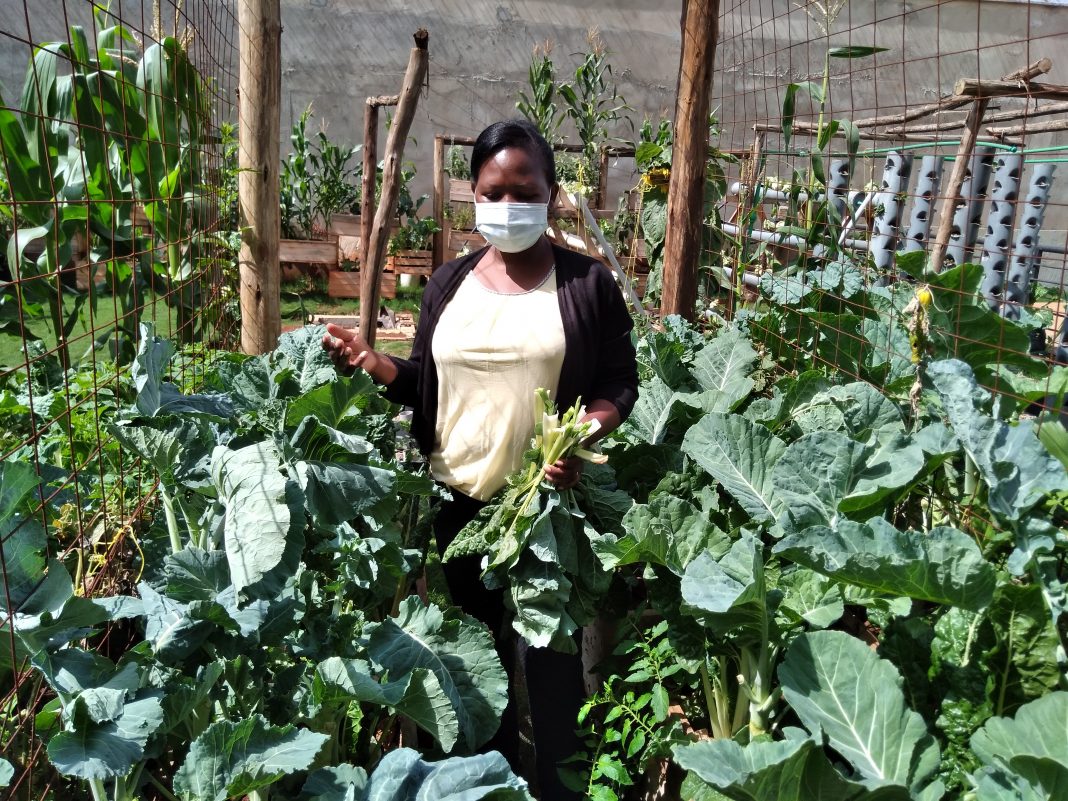 As today marks the annual World Food Day, the right to food continues to be a pertinent issue with millions grappling with food insecurity and various forms of malnutrition. The urban poor remain vulnerable with the pandemic worsening the situation.

However, in a bid to feed this population, a team of researchers at African Population and Health Research Centre (APHRC) led by Dr. Elizabeth Kimani-Murage, a Senior research scientist is encouraging urban agriculture in Nairobi and other urban settings in Kenya.

Through their vision for Nairobi which is a prototype before expanding to other areas, the team aims to restore Nairobi to “a place of cool waters” through a regenerative, transformative and human centred food system.

Speaking during a media tour in Nairobi, Dr. Kimani-Murage notes that one of the core aspects of the vision is innovative agro-ecological urban farming.

“Going vertical to ensure that the small space that each person has can produce adequate food for them and their families,” she explains, noting that methods such as hydroponics, sack gardens, pallets and staircase gardens ensure productivity.

She adds that to promote food safety they encourage kitchen gardening where people use organic fertilizers such as kitchen waste.

According to Dr. Kimani-Murage, the food rescue system, another aspect, is meant to collect food from markets or gardens where the food is almost getting wasted and distribute to those who cannot afford or repurpose the food into other stable forms.

The team also aims to promote urban-rural linkages to make transportation and distribution of food more efficient to avoid food waste along the supply chain.

The fourth aspect is economic empowerment with a focus on youth and women. This entails the creation of agribusiness through farming, food rescue system or through processing of food, notes Dr. Kimani-Murage.

The vision is timely as the concept of urban agriculture is slowly gaining momentum across Nairobi.

The Tumshangilieni Mtoto Centre, which supports children from the neighbouring Kibarage slum and those suffering from trauma and neglect while living in the streets, grows their own food using permaculture which endeavors to protect the ecosystem by not using chemicals and fertilizers.

They use organic fertilizers which they produce themselves using other biodegradable substances such as food wastes. They also control pesticides using natural methods such as herbs.

“Through this garden, we are able to save a lot considering we have more than 200 people to feed every day, we never ever buy greens from supermarkets or shops,” notes Japheth Njenga, the Centre’s director.

“On average, we would be spending about kshs. 5 000 every week on greens, so that’s a straight saving on our budget.”

Trainings on urban farming are ongoing at the Ruben Centre, which is located at the slums of Mukuru kwa Ruben.

According to Musa Juma Musa, the Farm manager at the Centre, the initiative has attracted a lot of youths and communities who come from various informal settlements across Nairobi such as Baba Dogo, Dandora, Mathare and Mukuru.

“This initiative is helping the unemployed youths as they are able to earn a living from making organic manure, planting of vegetables in small spaces using basic materials such as recycled plastics and organic farming,” he says.