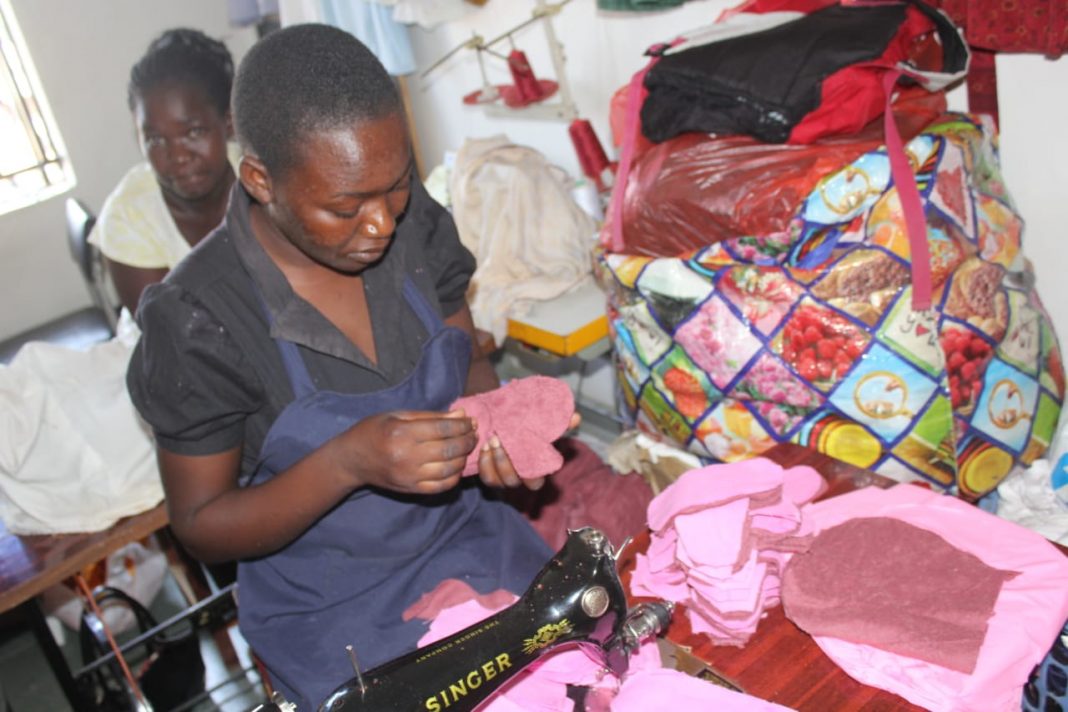 Life was not normal during menstruations for a 15 year old Olvent Anyango, a pupil at St. Mark Primary school in Nyalenda informal settlement in Kisumu. Olvent could miss classes, be ridiculed by her peers and almost became depressed during this period. This is now in the past thanks to the invention of reusable sanitary towels.

With these towels, Olvent isn’t concerned about what to use in the next cycle since they can be washed and reused for up to one year.

“My studies have improved since I don’t become absent from school during my periods. It is also hard for my peers to know when I am undergoing my cycle since the reusable pads have saved me from ridicule and abuses from my peers. This has boosted my self-esteem. I am now a bold girl,” says Olvent.

Winnie Mboya, a teacher at Arina Primary School in Kisumu, says that the reusable sanitary pads have solved the constant absenteeism among the adolescent girls. She says that initially absenteeism was the order of the day and this resulted to the drop of perfomance.

It is a similar script at Kasagam Primary school in Nyalenda slums. The pupils here said that initially, they had difficulty in attending school during their cycle. They say the reusable sanitary towels are not only easy to use but also durable since a single pack that contains six can be used for a year. They just wash and reuse them.

“Now I can attend lessons without fear of facing ridicule from my peers. These pads have given us a second chance to perform in school. The organisation should be supported to produce more of such pads,” says a pupil.

Access to sanitary towels is a major problem facing girls and women in informal set-ups in Kisumu. This is attributed to humble background of most of the residents. With this, school going girls have often fallen prey of sex predators who promise of giving them packs of sanitary pads and thereafter abusing them sexually.

With lack of access to sanitary pads, most vulnerable adolescent girls have resorted to missing school when they are on their menstruation cycle. This has in turn led to decline in their performance in school making them a laughing stock in the society.

Most of them, due to this, have been forced into early marriages as well as teen pregnancies. Access to sanitary pads has also been a major challenge to girls during this tough economic situation resulting from Covid 19 pandemic.

Kisumu Medical and Education Trust(KMET) , a health and education organization in Kisumu, has come up with an innovation to address this challenge and give girls and women a chance to smile even during their menses.

The organization is making reusable sanitary towels which they distribute at no cost to vulnerable girls and women in Kisumu’s informal settlements. Some, they sell locally at affordable prices to enable the sustainability of this project.

Susan Ogoma who initiated the project of making reusable sanitary pads in 2018 says that most girls use rags and leaves to block the flow during menstruation, this she says is unhealthy.

‘’Girls’ dignity is lowered when they cannot afford sanitary pads making them feel embarrassed during menstruation. I started this project to save our girls from public mockery and shame. Before this project, most girls were frequently absenting themselves from school. This has since changed,’’ said Ogoma.

According to Ogoma, they use locally available materials in making the sanitary pads. Mostly they use cotton fabrics since they are chemical free and friendly to human health.

She says that a pack contains six pads that can last for one year and as result saves the girls and women who are unable to purchase this essential commodity. They are able to make about 100 pads a day. A single piece she says can be used four times during the cycle. The towels are changed after every four hours.

‘’Our reusable sanitary pads have been approved by Kenya Bureau of Standards (KEBS) due to its natural nature. We don’t use any chemical in making these pads and this has not only made them environmental friendly but also healthy to use. These pads has no side effects such as irritation to the users,’’ said Ogoma.

Over the last one year, Ogoma says they have distributed 3,000 packets of reusable sanitary towels to vulnerable school going girls, totaling to 18,000 pieces of pads.

She says that handling these pads is easy since they can be washed with ordinary bar soap and clean water then dried under the sun after use. However, these sanitary pads cannot be shared once used.

‘’Hygiene is very key, thus we do not allow sharing of reusable sanitary pads among the beneficiaries. Once used, only the user can reuse it in future. We put these girls and women through a short training on how to use them so as to ensure their hygiene is observed,’’ said Ogoma.

Shakina Shaban who is a beneficiary of this project noted that since she started using reusable sanitary pads made by KMET, her life has changed. Unlike before when she was ridiculed by her peers, she can now attend classes without fear of soiling herself during menses. She says that the disposal of these pads is easy and environmental friendly.

She is encouraging many organizations to come up with initiatives of making affordable reusable sanitary pads to save girls and women from shame and embarrassment during their monthly cycle. She is also able to make the sanitary towels after undergoing training by KMET.

Besides giving girls and women smiling faces during menstruation, this initiative has also created jobs for teenage mothers as well those that have undergone sexual harassments in the society. These girls have been economically empowered since they can now make reusable pads on their own, some of which they sell.

‘’ We have trained many girls who can now make these pads. Our aim is to make girls and women both viable and respectable in the society. We are still targeting vulnerable girls and women who we train and make self reliant during this tough economic times,’’ says Ogoma.

Lack of enough materials for making the towels is a major challenge facing the sanitary towels making process by KMET. Ogoma says that the demand for the towels is high as compared to the availability of materials used. Financial constraint is also a challenge in this process since KMET is a non-profit organisation. Most of the sanitary towels are distributed for free.

Ogoma said that this initiative can be sustained with little sacrifices from their end to give vulnerable school going girls a opportunity to be in school and also save them from sex pests who take advantage of their inability to access sanitary towels She advices other organisations to replicate it and save the girls and women group in the society.

Kenya to Start Uprooting, Re-planting Trees Instead of Cutting

Countries to Focus on Other Health Issues, WHO Says