A new report by the UN Environment Programme (UNEP) has called for urgent efforts to increase the financing and implementation of actions designed to adapt to the growing impacts of climate change amidst climate talks in Glasgow.

The Adaptation Gap Report 2021: The Gathering Storm reveals that while policies and planning are growing for climate change adaptation, financing and implementation are still far behind where they need to be.

“As the world looks to step up efforts to cut greenhouse gas emissions – efforts that are still not anywhere strong enough – it must also dramatically up its game to adapt to climate change,” said Inger Andersen, Executive Director of UNEP at the launch of the report.

“Even if we were to turn off the tap on greenhouse gas emissions today, the impacts of climate change would be with us for many decades to come. We need a step change in adaptation ambition for funding and implementation to significantly reduce damages and losses from climate change. And we need it now.”

COVID-19 recovery stimulus packages are also becoming a lost opportunity to finance climate adaptation, according to the report.

Also, less than one third of 66 countries explicitly funded COVID-19 measures to address climate risks up to June 2021.

On the positive side, climate change adaptation is increasingly being embedded in policy and planning.

Around 79 per cent of countries have adopted at least one national-level adaptation planning instrument – an increase of 7 per cent since 2020.

Implementation of adaptation actions is also continuing to grow slowly, with the top ten donors funding more than 2,600 projects with a principal focus on adaptation between 2010 and 2019 according to the UNEP report.

Regardless of this progress, the report finds that further ambition is needed in financing and implementation. There is an urgent need to scale up and further increase public adaptation finance, for both direct investment and for overcoming barriers for private sector adaptation.

Further scaling up implementation of adaptation actions is needed to avoid falling behind on managing climate risks, particularly in developing countries.

Adaptation planning and implementation also need to consider higher-end climate scenarios and impacts projected by the Sixth Assessment Report of the Intergovernmental Panel on Climate Change, launched in August 2021, to prepare for more intense risks than those already observed.

‘’We know there is more to do, much more. Particularly we need more finance to support the priorities of least developing countries. We urge all finance providers to improve access to finance including endorsing the principle of the task force on access to finance,” said Alok Sharma, President of the COP26.

“Alongside this we need to increase the finance flow into adaptation and we need to encourage effective and inclusive planning ensuring that climate risks are taken into account across the whole of society.’’

The report also found that governments should use the fiscal recovery from the pandemic to prioritize interventions that achieve both economic growth and climate change resilience. 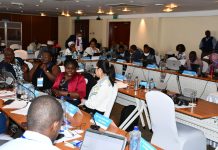 Critical Food Insecurity Persists in Most Parts of Eastern Africa

Herbal Medicine could Contribute towards UHC