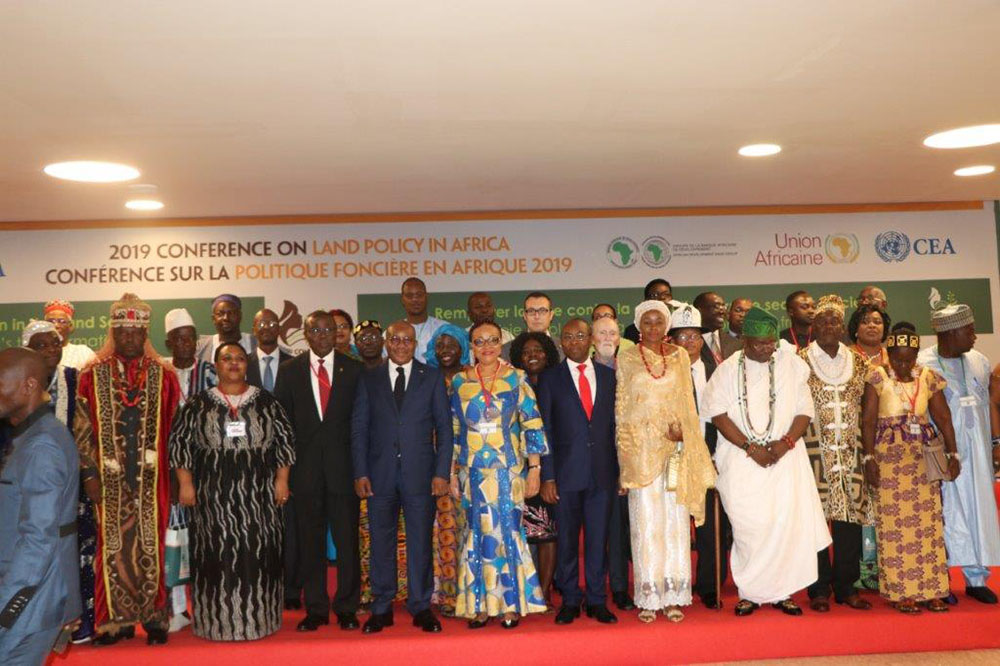 They say inheritance remained an essential method of land acquisition for women even though inheritance laws and customs often favoured men over women.

Conflicting and overlapping legal and regulatory frameworks and jurisdictions over land and resources were further excluding women and other vulnerable groups.

The theme of the biennial conference which has been co-organized by the African Union, the United Nations Economic Commission for Africa and the African Development Bank, is “Winning the fight against corruption in the land sector: Sustainable pathways for Africa’s transformation”.

“Women are less likely to be allocated land through community distribution or inheritance due to norms related to ancestral lands and statutory legal frameworks which may also be discriminatory or poorly drafted, including land law, family law, and civil law,”  said African Union Commission’s Rural Economy and Agriculture Commissioner, Ambassador Josefa Sacko.

She said that for far too long, African women have contributed to the development of the continent without due recognition, adequate support and sufficient benefits.

“This is in part due to gender-based disparities in access to productive resources and opportunities such as land.”

They emphasized the need for collective responsibility by governments and experts in accelerating the gender-responsive implementation of the AU agenda on land.

There should be fair and efficient land management to support moves to transform the continent.

“It is simply essential that women have access to land. Clear policies must be put in place to ensure implementation of recommendations for land management,” said Angela Didiza, South African Minister of Agriculture and Agrarian Reform.

Bitange Ndemo underscored the need to adopt appropriate technology choices for efficient land management. “We cannot make small farms productive. That is why we need to find ways of turning them into large farms. We must decentralize the land-management system and clearly define what we need over the next ten years; that is the right way to improve the system.

“We have aggravated the system by issuing land titles. Giving someone a piece of land with a land title is not the way to solve the problem; the real issue is what use it is put to. Land has a lifespan and we need to work on using it well to provide the maximum benefit to the entire community. The most urgent need now is to rethink this way of managing the land issue,” he said.

He said land was the foundational asset upon which economies were built, adding property rights were essential for creating a conducive environment for attracting private sector investment on the continent.

“Globally, success in achieving the sustainable development goals is underpinned by good land governance, as it contributes to eliminating poverty and hunger; promoting sustainable agriculture; advancing gender equality and women empowerment; and promoting inclusive economic growth; among other development objectives,” he said.

Mr. Karingi said environments of legal uncertainty not only undermined business confidence, but could foster corruption.

“Undeveloped systems with complex and unclear administrative processes contribute to lack of transparency and accountability in the administration of land. These conditions increase the likelihood of corruption. Corruption in the land sector has far-reaching implications for Africa’s development,” he added.

As a rich continent with vast agricultural and land resources, Africa should be able to feed all her people without any problems. Technological improvements in agriculture, as well as in geospatial sciences and other relevant land sectors, the tools were available to implement policies to ensure fair and sustainable land policies are enacted and implemented in every country on the continent.

“Almost every person on the continent has been affected by corruption and very often the distribution and registration of agricultural and urban land is the reason for it,” he said.

He emphasized the importance of good land governance as well as effective land administration and sustainable land management for the African continent which spends over US$35 billion annually importing food from the West.